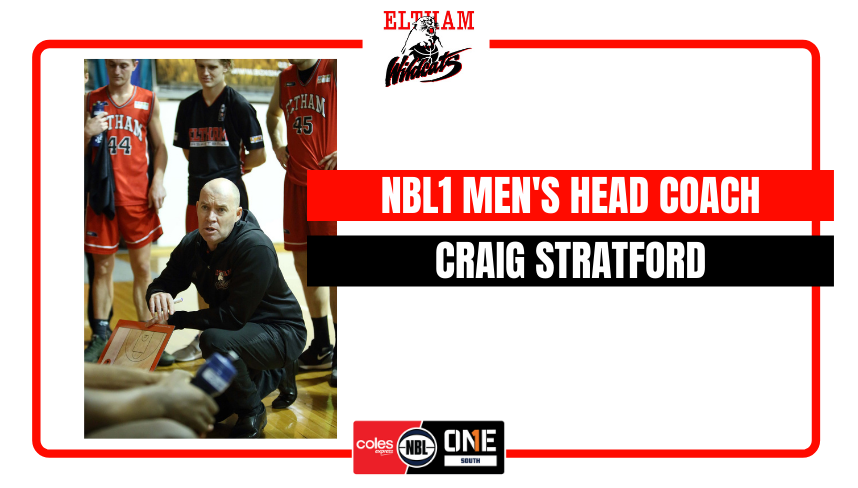 The Eltham Wildcats Basketball Club is pleased to announce Craig Stratford as the Head Coach for the NBL1 Men’s team.

Well known within basketball circles, Craig has built a highly successful coaching resume with international opportunities amongst his greatest achievements. Originally hailing from regional South Australia, Craig moved through the ranks eventually representing the Mt Gambier Pioneers in the SEABL. Likewise in coaching, Craig has earned his opportunities over the years and has become widely recognized as a great developer of players, a strong strategist and a high-quality person.

It is in the north-east of Melbourne where Craig now resides, where his coaching started from humble beginnings, coaching his children in the Eastern Districts Junior Basketball Association (EDJBA) for the Eltham Wildcats. Stratford was quickly identified and afforded opportunities to move through the Club’s programs. Craig blossomed at the Junior Championship level in the VJBL where the highlight has been leading the Eltham U14 Boys to back-to-back U14 National Club Championships in 2017 and 2018. In 2018, he had the chance to take the national champions (the 2017 team) to the inaugural Jr NBA World Championships in Florida, finishing 6th in the world. This opportunity led to Craig being identified by Carlos Barocca, the Associate Vice-President of NBA Asia who ensured Craig was to lead the Asia-Pacific team to the 2019 Jr NBA World Championships and involvement in other NBA Asia programs. Carlos is still a strong mentor and friend to Craig. Further international opportunities became available as the 2018 national championship team went to an invitation-only event in Japan.

With an interest in extending his coaching knowledge, Craig was provided the opportunity to be an Assistant Coach to the Eltham Senior Men’s team in the Big V competition in 2017-18, before taking on the highly successful Youth Championship Men’s team from 2019-2021. Identified by Basketball Victoria’s High Performance programs, Craig coached in the State Performance program and was then selected for the Victorian state program, most recently as the U18 Boys Victoria Metro Head Coach.

After development and success at local, national and international levels and with experience in the senior program as a player and a coach, the Eltham Wildcats is pleased to provide the opportunity for Craig Stratford to lead the club’s elite level Men’s team in the NBL1.

CEO of the Eltham Wildcats Greg Jeffers is elated about the appointment and the pathway and opportunity is has created for a local in the Eltham community.

“We want to be seen as a club that provides opportunities to people from within our program when there is someone at the level to do so. When the NBL1 Men’s team had a vacancy in the Head Coach position, it was a logical phone call for us to make. He is highly respected by players and coaches alike, has a strong knowledge of the game and I’ve been really impressed with the time and dedication Craig has put into the art of coaching, which will all put him in good stead to succeed at NBL1.”

Newly appointed Craig Stratford is ready to get started.

“I am very thankful to the club for the opportunities and support they’ve provided me since my family joined. NBL1 fits the pathway that the club now provides perfectly and is a great chance for people in our region to compete at a level that wasn’t previously attainable. I am looking forward to getting our group together, preparing in a professional manner and making an impact on the 2022 season. We’ve got a strong coaching we’re putting together to help the playing group achieve their goals for 2022.”

Stay tuned for more news and information regarding the NBL1 2022 season and further announcements.