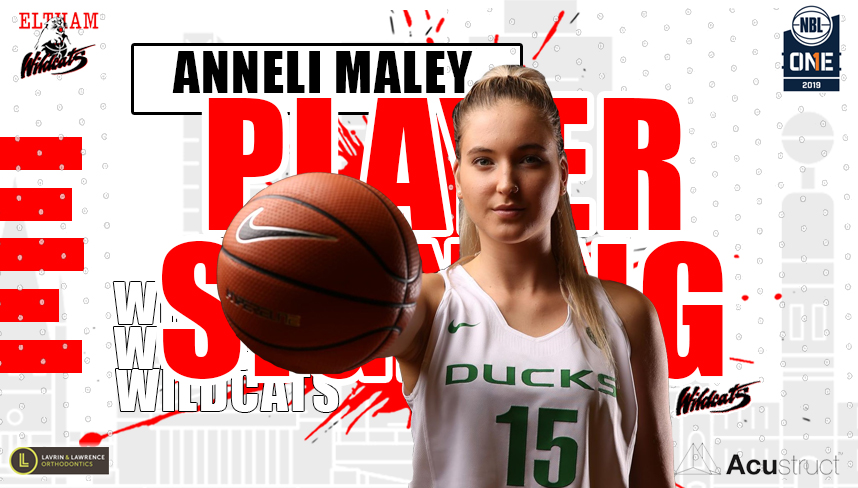 The first three 2020 NBL1 signings has seen three juniors of the Club given the chance to play for their home club at the top level. The fourth is no different, as the Eltham Wildcats announce the signing of reigning NBL1 ‘Youth Player of the Year’ Anneli Maley for the next two years.

The Wildcat family have watched the now 21 year old Anneli grow up running the floorboards of Eltham High School, watching her progression through the junior ranks, to eventually graduate the club as one of its finest ever talents.

Starting out for the club in its beginner programs and quickly moving into its domestic program within the country’s largest junior competition (the Eastern Districts Junior Basketball Association), the foundations of a talent were being laid. Anneli progressed through Junior Championship before being invited to the Australian Institute of Sport having been a dominant force for Vic Metro at the National Junior Championships and also for Australian junior teams. Along her path at Eltham, Maley had the opportunity to be coached and developed by some of Eltham’s finest graduates; Ben Cukier and Zoe Carr.

Through 2019, the Wildcats fans watched in envy as Anneli not only won the Youth Player award, but also led the NBL1 competition for rebounds. The league MVP nominee was amazing, averaging 19.6ppg, 15.0rpg and 3.1apg and with a season under her belt in the WNBL with Southside Flyers, she comes home to the Wildcats ready to take her game and the club another big step forward.

“As one of the club’s best ever junior players, but also a player who has proven herself at this level to be amongst the best, it was natural that trying to get Anneli home to Eltham was a main target of our off-season. She lives here, was a student at Eltham High, her family are involved with us and she built the base of her game here, but more importantly, the next group of young Wildcat girls that want to follow in her footsteps can support her.” Eltham Wildcats’ Greg Jeffers said.

Anneli joins Erin Riley for the 2020 season, coached by Grant Spencer, as the club strives to break into the playoffs having finished 9th in its debut season, missing playoffs by just a single game. Head Coach Grant Spencer summarised the signing “We, including the club and the coaching staff, learnt a lot in 2019. It hurt not making the playoffs, but at the same time I think we proved what we’re about and where we’re heading. Anneli is one the best young talents in the country and I look forward to working with her.”