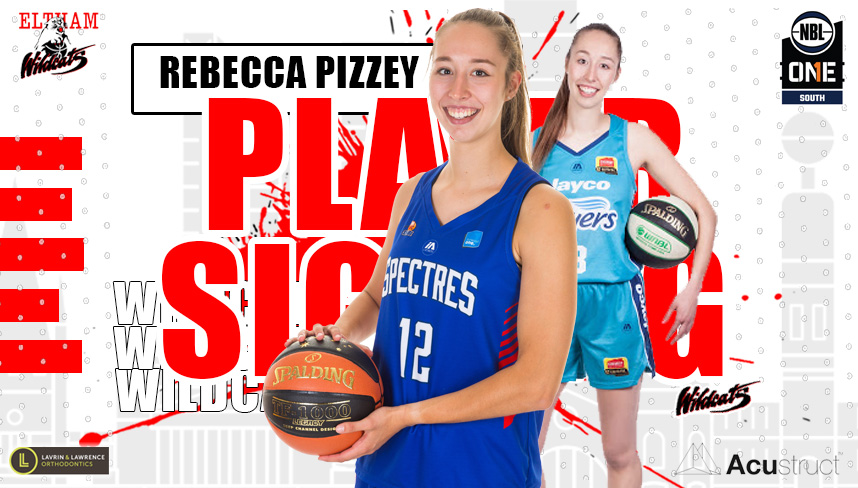 The Eltham Wildcats are putting the pieces in place to move forward in the women’s competition for NBL1 South 2020. Having finished perilously close to playoffs in the club’s first NBL1 season, coach Grant Spencer and the club have tried to make improvements.

With that, the Eltham Wildcats are pleased to announce the signing of Rebecca Pizzey for the 2020 NBL1 South season. Pizzey joins the Wildcats having played the 2019 season with Nunawading, averaging 11.6ppg and 6.5rpg, but it is her length around the rim that the Wildcats were also keen to have on board for 2020, averaging over a block a game.

“I’ve admired her work ethic, her high basketball IQ and she’s demonstrated her willingness to do the little things in the game to influence a positive outcome for the team. She is a great culture fit for our club, as we continue to build our women’s program. Her game will fit with the group which is coming together.”

The young girl who first pulled on a singlet for the Balwyn Blazers in the Eastern Districts Junior Basketball Association (EDJBA) has progressed through the ranks to have been on scholarship at the Centre of Excellence (AIS), represented Australia at junior levels and is now starting to develop her game at the national level in the WNBL for a highly talented Southside Flyers team. Eltham CEO Greg Jeffers explained the club’s recruitment strategy for NBL1:

“Our club takes great pride in its place within the EDJBA (Eastern Districts Junior Basketball Association). It is the starting point in basketball for 13,000 junior players through the east and north-eastern suburbs. With the Eltham Wildcats in NBL1, it is a chance for the wider association and their clubs to have a clear path to the elite level that hasn’t been available in the past. It is why we’ve made a strategic decision to target players from not just the Eltham junior program, but those who’ve come from within the mighty EDJBA system. Rebecca is an example of that, starting with the Balwyn Blazers and continuing through Bulleen. This signing on the back of Anneli Maley, Lily Scanlon and Erin Riley as well as the likes of Abbey Ellis last season demonstrates our thinking.”

The Eltham Wildcats will make further roster announcements in the weeks ahead. The women’s team has announced for 2020: Anneli Maley, Lily Scanlon, Chelsie Schweers and Erin Riley.